This article contains information and statistics from various sources on guns, gun control, and gun violence.

In the three-year period from October 2003 through September 2006, the Bureau of Alcohol, Tobacco and Firearms (ATF) conducted 202 operations at 195 gun shows, leading to 121 arrests and 83 convictions (with some cases still pending as of June 2007).

A 1997 U.S. Justice Department survey of 14,285 state prison inmates found that among those inmates who carried a firearm during the offense for which they were sent to jail, 0.7% obtained the firearm at a gun show, 1% at a flea market, 3.8% from a pawn shop, 8.3% from a retail store, 39.2% through an illegal/street source, and 39.6% through family or friends.

To read the entire article and see additional charts and statistics, click on Gun Control Facts.

Don Kates and Gary Mauser wrote about the correlation between the amount of guns and the amount of deaths across different countries.

To read the entire report, click on Would Banning Firearms Reduce Murder and Suicide?

Arkadi Gerney, Chelsea Parsons, and Charles Posner in April 2013 from the Center for American Progress wrote about the 50 U.S. states and the correlation between gun violence and gun laws. 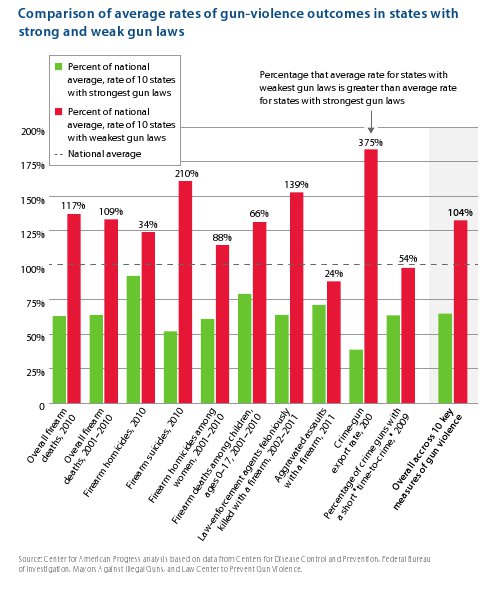 To read the entire report, click on America Under the Gun.