In a 5-4 ruling, the Supreme Court Struck down Section 3 of the Defense of Marriage Act this morning in the much anticipated ruling United States v. Windsor.  The majority opinion was given by Justice Kennedy who was joined by Justices Ruth Bader Ginsburg, Stephen Breyer, Sonia Sotomayor and Elena Kagan.  Chief Justice John Roberts and Justices Antonin Scalia, Clarence Thomas, and Samuel Alito dissented.

Case background: Edith Windsor met Thea Spyer in 1963, and they were married in Canada in 2007.  When Spyer died in 2009, she left her whole estate to Windsor.  Windsor sought a marital exemption from the federal estate tax which excludes from taxation “any interest in property which passes or has passed from the decedent to his surviving spouse.” 26 U. S. C. §2056(a).

Her exemption request was denied because Section 3 of DOMA contains the passage:

In determining the meaning of any Act of Congress, or of any ruling, regulation, or interpretation of the various administrative bureaus and agencies of the United States, the word ‘marriage’ means only a legal union between one man and one woman as husband and wife, and the word ‘spouse’ refers only to a person of the opposite sex who is a husband or a wife.” 1 U. S. C. §7.

Windsor could not be considered a “surviving spouse” since federal law only recognized heterosexual couples.  She paid $363,053 in estate taxes and then sought a refund, which was denied by the IRS.  Windsor then took the refund suit to a district court, contending that her equal protection under the law as provided by the 5th amendment was violated by DOMA.

While the case was still pending, President Obama instructed the Department of Justice not to defend the statute in Windsor although Section 3 of  DOMA would still be enforced by the executive branch (i.e. Windsor’s taxes would not be refunded). The Attorney General of the United States notified the Speaker of the House of Representatives that the Department of Justice would no longer defend the constitutionality of DOMA’s §3.  In response, the Bipartisan Legal Advisory Group of the House of Representatives (BLAG) voted to join in the litigation to defend the constitutionality of DOMA’s §3.

From there, the case went on to the Supreme Court. 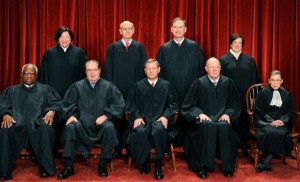 In his majority opinion, Justice Kennedy posits that the Supreme Court has jurisdiction over this case because the fact “that the Executive may welcome this order to pay the refund if it is accompanied by the constitutional ruling it wants does not eliminate the injury to the national Treasury if payment is made, or to the taxpayer [Windsor] if it is not.”

Concerning the constitutionality of DOMA’s section 3, Kennedy states, “The federal statute is invalid, for no legitimate purpose overcomes the purpose and effect to disparage and to injure those whom the state, by its marriage laws, sought to protect in personhood and dignity.  By seeking to displace this protection and treating those persons as living in marriages less respected than others, the federal statute is in violation of the Fifth Amendment.”

The majority opinion states that “DOMA because of its reach and extent, departs from [the] history and tradition of reliance on state law to define marriage. ‘Discriminations of an unusual character especially suggest careful consideration to determine whether they are obnoxious to the constitutional provision.’ (Louisville Gas & Elec. Co. v. Coleman, 1928)”

It also asserts that the only motive for DOMA was a “bare . . . desire to harm a politically unpopular group.”

Chief Justice Roberts and Justices Scalia and Thomas claim that the Supreme Court has no jurisdiction over the case:  “We have no power to decide this case. And even if we did, we have no power under the Constitution to invalidate this democratically adopted legislation…” (Scalia)

Justice Alito’s dissent also argues along the same lines: “Edith Windsor, supported by the United States, asks this Court to intervene in [the marriage] debate, and although she couches her argument in different terms, what she seeks is a holding that enshrines in the Constitution a particular understanding of marriage under which the sex of the partners makes no difference. The Constitution, however, does not dictate that choice. It leaves the choice to the people, acting through their elected representatives at both the federal and state levels.”

Justice Scalia points out that the final sentence of the Solicitor General’s brief states, “For the foregoing reasons, the judgment of the court of appeals should be affirmed. ” “One could,” he states,  “spend many fruitless afternoons ransacking our library for any other petitioner’s brief seeking an affirmance of the judgment against it” “The plaintiff and the Government agree entirely on what should happen in this lawsuit. They agree that the court below got it right; and they agreed in the court below that the court below that one got it right as well. What, then, are we doing here?”

Scalia then gives a stinging criticism of judicial review, claiming that it is not the Court’s position to decide whether or not a law is constitutional, but to decide disputes between the government and the people involving the law.

He goes on to warn that “By formally declaring anyone opposed to same-sex marriage an enemy of human decency, the majority arms well every challenger to a state law restricting marriage to its traditional definition.”

Justice Scalia concludes by wishing the majority of the court had let the people decide on homosexual marriage legislatively.  “Some will rejoice in today’s decision, and some will despair at it; that is the nature of a controversy that matters so much to so many. But the Court has cheated both sides, robbing the winners of an honest victory, and the losers of the peace that comes from a fair defeat. We owed both of them better. I dissent.”

It is unquestionable that today’s Supreme Court ruling on the Defense of Marriage Act is as equally monumental as it is are controversial.