U.S. officials have announced their intentions of going ahead with the administration’s plans of arming the Syrian rebels.  “We believe we are in a position that the administration can move forward,” House of Representatives Intelligence Committee Chairman Mike Rogers told Reuters.  The CIA will be arming the Syrian rebels within the next few weeks.

Meanwhile, Syrian Deputy Prime Minister Qadri Jimal left a meeting with Russian Foreign Minister Sergei Lavrov in Moscow, stating that “All agreements between Russia and Syria in the area of arms deliveries are in place…The contracts continue and are in force.”  These weapons include S-300 air-defense batteries which would make Western enforcement of a no-fly zone over Syria very difficult.

General Martin Dempsey, chairman of the U.S. Joint Chiefs of Staff, has stated that enforcing a no-fly zone over Syria would cost U.S. taxpayers $1 billion per month, would be considered an act of war, and would endanger U.S. jets attempting to enforce it.  However, Senator John McCain, one of the most ardent supporters of arming Syrian rebels and enforcing a no fly zone, argued, “We wouldn’t be starting a war.  We’d be trying to stop a massacre that’s going on.”

Israeli Defense Minister Moshe Yalon warned Russia this May that Israel would consider the delivery of the anti-aircraft batteries a threat and is prepared to use force to stop the delivery–a threat which, if affected, could lead to Russian casualties.  It has been confirmed that on July 5th, Israeli warplanes conducted an airstrike on Latakia, Syria targeting weapons shipments.

Former deputy Israel Defense Force chief of staff Dan Harel has said that the situation in Syria “could explode at any moment…and pose a direct challenge to us.”  He isn’t the only one concerned.  David Shedd, deputy director of the U.S. Defense Intelligence Agency has warned that the conflict could last “many many months to multiple years.”

In the face of the volatile world spectrum, Americans remain divided as to whether the decision to send arms to Syria was a wise one.  A Gallup poll taken in June revealed that only 37% of American adults agreed with President Obama’s decision to send military aid to Syria; 54% disapproved.

The American or international reader’s view on whether the rebels or the Syrian government under Assad are the protagonists or villains may vary in part with his or her news sources.

The Obama administration claims that the Syrian government has used chemical weapons against the rebels, the New York Times reports.  President  Obama has called the use of chemical weapons a “red line,” which if crossed would call for action from the United States.

However, Russian findings indicate that the rebels, not the government, were responsible for the Khan al-Assal incident where chemical weapons led to the death of 30 people.

On July 7th, the Syrian military claimed it raided a rebel storehouse, confiscating “281 barrels filled with dangerous, hazardous chemical materials.”  Syrian UN Ambassador Bashar Ja’afari reported that the chemicals were “capable of destroying a whole city, if not the whole country.”

A senior United Nations team responsible for investigating the use of chemical weapons arrived in Damascus Wednesday  to discuss terms of a possible probe into the attacks.

A UN report has indicted Syrian troops for torturing children and using them as human shields on tanks.   UN special representative Radhika Coomaraswamy has described conditions as “horrific” and says that children as young as 10 years old are tortured in detention.   The report also criticized the rebels for endangering children on the front lines.

The Vatican news agency, Agenzia Fides, reported that in Homs, Syria, 800 civilians including 400 Christians–mostly women and elderly–were used as human shields by rebels to prevent attack by Syrian government forces.  (As the battle at Homs continues, the Red Cross has been negotiating without success for the past 20 days to bring supplies to 2000 civilians trapped in the city and warns of “tragic” consequences if they are not given the go-ahead by Syrian authorities.)

The rebels have publicly carried out mass executions in Daraa, Aleppo, and other locations and are also known to have beheaded government soldiers.  Government-affiliated militia are not spotless either, having been linked to the killings of dozens of women and children in the Sunni village of al-Bayda.

Last month at a Downing Street press conference, Russian Premier Putin  warned British Prime Minister Cameron that while blood was on the hands of both parties in Syria, “one does not need to support the people who not only kill their enemies, but open up their bodies and eat their organs in front of the public and cameras.”  Premier Putin was referring to video footage posted online by a rebel showing a comrade eating a dead rival’s heart.

Russian Foreign Minister Lavrov has issued a call for the Syrian government and opposition to cooperate in expelling all “terrorists and extremists from Syria.” 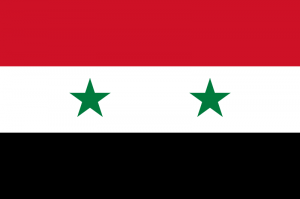 With atrocities rampant on both sides of the struggle, some believe it would  have been prudent for the United States and Russia to refrain from taking sides.  With many hands in the fray, some see it possible that the situation could easily escalate into global conflict.  Others believe involvement in the conflict is necessary to avoid further humanitarian disaster.

Our prayers go out for peace in Syria.  More than 100,000 people have been killed in the Syrian civil war over the past two years, and sadly a peaceful conclusion is not in sight.